Unless you never go on the Internet you will have come across people either bashing Hillary Clinton or Donald Trump. I myself have done this. In fact, the election has been so hyped I bet even the politically inactive have an opinion about each side. Because of the explosion of data in the last couple of years the more active brandish stats that enforce their political agenda. The problem with stats is that they’re a tool. Very few people who use stats collate them just for the fun of it. Most want to see if a particular theory is correct or to get a bigger understanding of the situation. However, as we all know the tool doesn’t make the craftsman. Mathematical skill and critical thinking is still needed. A hammer can help build or destroy, and stats can inform of misinform.

Now getting stats wrong is forgivable. Everyone misses something or miscomprehends something in their life. However, what I’m about to show you is something less forgiving. In this case, it’s stonewalling . This is where someone just ignores you or claims not to understand you until you give up. Recently it has become fashionable to ignore people based on character assignations. The pretense being that they are so right and you’re so wrong that it’s not worth wasting their time with you. However, for these sort of people, stonewalling is a logical fallacy. If you want to engage with someone you must be willing to engage with his or her points. First of all, let’s look at the following statement: 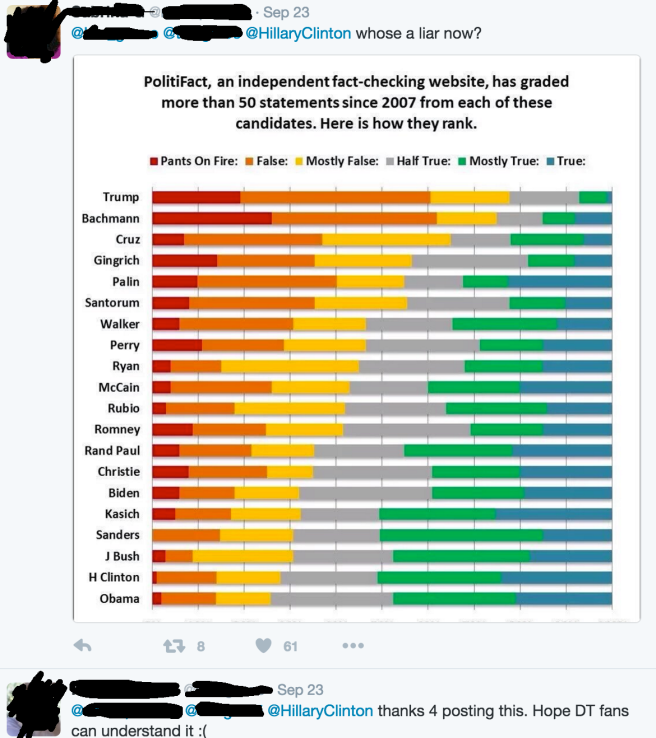 The poster has already put herself out there by preemptively insulting the other side based on comprehension issues. Due to cognitive dissidence the poster will is less likely to be open to any new information about the stats that go against her otherwise she will be by her own words, stupid. However, there is a glaring issue with the stats. We all know that lies have different weights. Measuring how objectively false is one thing but lies have different intents and contexts. If you lie about eating a chocolate bar, it has a different moral weight than lying about murder. Lying about eating a chocolate bar twice is not worse than lying about murder once. Sometimes we lie to protect others, or we lie because we get flustered. Because of this, the stats lack the dimensions needed to draw any meaningful conclusions. However, the poster sticks to her guns with: “a lie is a lie” which is way too simplistic to draw any meaningful conclusions. This leads to the following discourse:

This is a classic example of stonewalling. However, I cannot read her mind so I lay it down step by step. From 1-3: 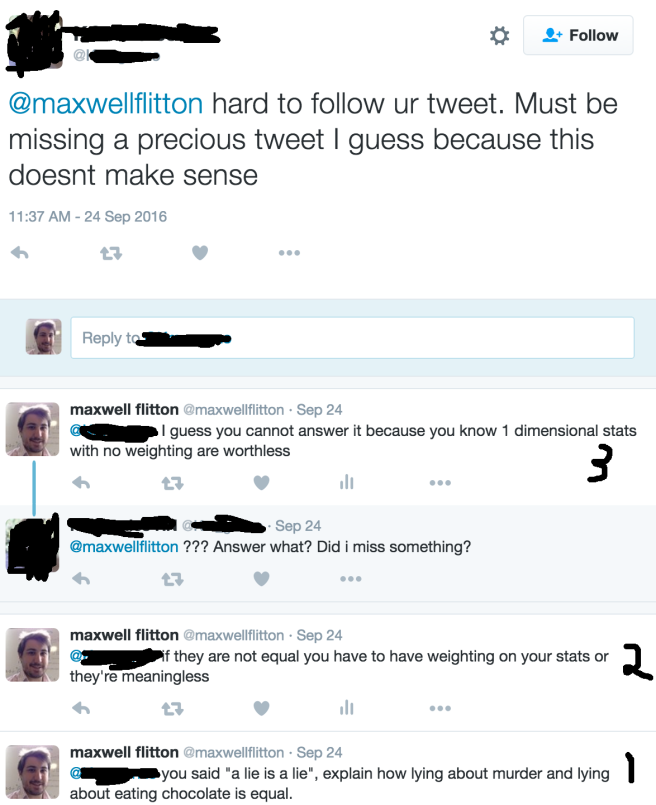 I appreciate the hard place she is in. She either has to explain why a “lie is a lie” which we all know is absurd, or she has to concede that the stats that she pushed with the notion that others are not very smart don’t really prove much, which is a hard pill to swallow. This is why I find myself shying away from politics more and more. Both sides have a large group of people who do not want to know the answer. They sling mud for both sides whilst jumping at the chance to call others immoral or stupid. When you ask them about their stats they freak out and either play dumb or attack your character. The saving grace for this encounter is that she didn’t make it personal.

Update: I sent this post to the person who I had this discourse with. Her response sadly was classic of many who suffer from cognitive dissonance:

Nobody is so simplistic that you boil them down to a one-line slogan. Below is an extreme example. This guy states that “He’s definitely a racist in my opinion” even though he cannot come up with a single example of him being a racist. Now Trump may be a racist, I’m not defending Trump. What’s depressing here is that he has gone to the trouble to make signs and go out protesting whilst not bothering to read around the subject beforehand.

One thought on “Stonewalling with bad stats”