A couple of years ago, a Google company Deepmind worked with the Royal Free Hospital to produce an app for managing acute kidney injury. At the time I was working, and sitting exams so I never really gave it much thought. Somebody in the A and E where I was working told me that they were using AI. This made sense as Deepmind had produced impressive demonstrations with AI, and was full of talented, hard-working engineers. I shelved this unchecked knowledge in the back of my mind and continued to work. A couple of years later I had completely healthcare. At the time of writing this, I became an R&D software engineer in financial tech. My days were spent learning new frameworks in my spare time, getting my head around big data projects, and complaining about the tube commute into the financial district of the City of London. This all came at the same time of buying a flat, an ordeal which took 6 months to complete. My attention to streams only up when I caught up with an old friend who was still in the health AI field. It was on the way home, in a cramped tube carriage that he informed me about streams not actually having any AI.

I was shocked, why would a cutting edge AI company not build an AI app? A few minutes Googling lead me to a Deepmind where the explained why they are not using AI yet [link]. OK, so it’s not a conspiracy, they’ve been fairly straightforward. The article basically makes the point that there’s loads of low hanging fruit that will give quick good wins. I’m completely for this. I’m often telling people to simplify their goals as there’s so much that can be done. The stand-alone article removed from all context is completely rational. It becomes completely irrational when you realize that this basic task was built and developed by a world-leading tech company. In order to fully demonstrate the absurdity lets go through the steps required. Below is the AKI algorithm: 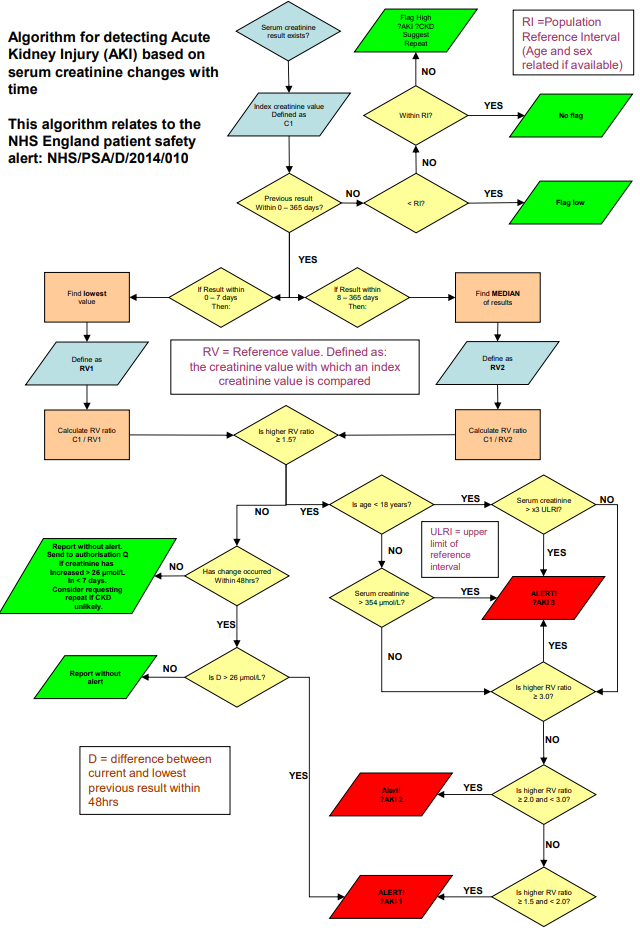 In terms of computational difficulty, there is nothing complex about this algorithm. It’s a series of steps with some simplistic if else if and else conditionals in it. You’d be shocked if a second-year undergrad computer science student couldn’t code that. It would be a little clunky but hell, someone with 2 months introduction to python programming could code this. It’s not like this algorithm is classified, it’s well known, so let’s move onto the next step, building the smartphone app.

The complexity of UX and design of these apps can scale. But in terms of apps is fairly straightforward. You’re not using any specific hardware components of the phone, it’s literally getting data and running it through that introduction to coding difficulty level AKI algorithm. Javascript frameworks have made is fairly straightforward. One codebase in javascript can produce an app that will compile to Android and IOS. I know of some doctors who have coded apps that are on the app store. It was certainly not something that only Deepmind could do.

So there’s the last part. Getting data from the system to the app. This is done with something called API. Again this is not Google level tech. Heck APIs are so mainstream if you apply for a software engineering job it’s not uncommon for them to have a test API knocked up. Before you get an interview with the company, they will ask you to code a simple app that will get data from their test API and do something with it. Yes, interacting with APIs is so trivial, people will knock up an app that will do that for a job interview.

Don’t get me wrong, Google and Deepmind do some amazing things. I was blown away by their eye imaging. But handing over projects to Google that could be done by the open source community not only hands over excessive power to one company, but it also inhibits the NHS’s ability and opportunity to develop its own solutions. It’s like raising a child. You don’t do everything for them otherwise they will just be completely acopic.

So what could the NHS have done instead? It could take an open source approach to projects like AKI management. Github repos for open source are 100% free. That means anyone can copy or fork the code, but the reop owners can choose which code patches get merged into the app. You can then host competitions. Yes actually host hack days that have a purpose and clear goal. Universities and NHS departments from all over the UK can download, test, and contribute to the app. With an open source git repo, it’s 100% free and easy. Knock up a fake API with a known range of patients for people to test their patches on. Knocking up APIs on microframeworks is very quick and easy as the microframeworks are open source and free. Hosting it on a server is also not that hard or expensive. Let’s say we were hosting a competition for AKI. We would knock up an API connected to a MySQL database (open source free database) in roughly 6 hours if the coder knows what they were doing. You would then host it on a server (for test servers it costs me $16 a month to run). And then give the API keys to different teams and departments. This was the perfect opportunity to get an open source community up and running. Iron out the kinks, develop health software that could be used all over the NHS. It could be widely evaluated as anyone could look at the code. People from all over the world could fork it and try and improve on it. We could be the epicenter, the beginning of a global open source health software movement. Like medical journals, we could have born, open source git repos for healthcare software. But instead, our NHS “innovation leaders” asked for daddy Google to do even the most basic tasks for us.